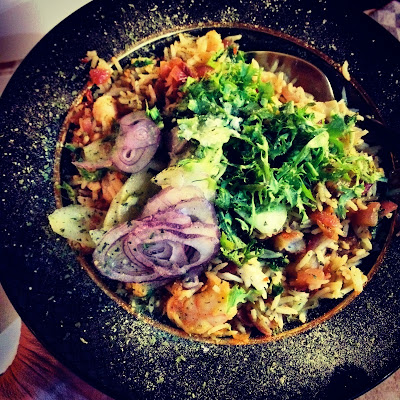 We were eating a lovely homemade meal on the cheap and at our convenience when I got to thinking on the politics of food.

We here in urban areas, these cesspools of pretense really, dressed up in all form of extravagant uselessness, and its boredom-inspired specialization, hyper-ornamentation and trifle aesthetic dogmas, we here in the big smoke take our foodie orientations for granted and at our leisure.

We demand to be dazzled and seduced by our own luckiness, our luckiness to be feasting on such quaintly glamourous dishes, au courant feats of hipster panache come by flesh or field, a cuisine that cares little for our real nutritional or agrinomic needs nor for what it really costs to realize it's vision on our plates but instead tells us everything about the schizophrenic ambitions of the so-called executive chef, the cynicism of business enablers and the social climate that invites their kind of distraction-lionization, pandering to scales of tantalization and hollow, short-term delights instead of higher sense or respect for others.

So it was flush with my occasion to distaste this overwrought mangling of mother nature dressed up as cutting edge gastronomy that I lighted on the obviousness of our most important Canadian index. And it goes ruthlessly like this. The closer you are to urban centers and their wholesale capitulation to the mercantile ideogram, the better your goods, municipal services, quality of life and the like. But as you travel deeper into the wilderness and its nature-dominant, more at-one ways of being, the hunter and bush lands of rock and lake forests and low-brush straights punctuated by LCBO outlets, Tim Horton's and the long highway, the less attainable food, health, and nonviolent culture becomes for the people. In essence, the more north you go, the farther you are from consensual dream of the hive, the underwhelming central planning legacy of post-industrial Canada and the worst of legislative anglophile patriarchy, the more native and untamed the people, white, red or brown. Communities are less serviced and therefore, they're more shabbily educated, fed, clothed and housed.

Canada, after all, is a disassociative country of strict regional and language lines where harmonious ways of living with the land, and the honouring of our habitat and traditional ways, are not given equal weight through mostly misunderstanding. The world is shopping, not listening to the woods or dancing on the cherry pink lake line, howling to a milked-up tit of a moon.

The politician serves the dominant marketplace valuation scheme and it alone. He can never accord with the environmental person who looks first for the best way to pass and then thanks the bush for letting her travel as she makes her way unobtrusively through the branches and trunks as if weaving through honoured elders at a long house, instead of hacking bushes down in juvenile spite, rationally dissembling about deadweight clearing and production efficiencies.

If we could find a user-friendly and economical way to spread permaculture, mycology and guerrilla gardening, water-health and purification technologies, alternative energy networks, bodywork and movement practices, music and arts guilds, food and health scenes, narrative report and literature forms, if we could get these features out of our delusions and into genuine action, out of the centers and back into the periphery of our poorest communities and most distal outposts, we could make the government and bourgeois neglect of the past a self-solved opportunity for a reborn Canadian culture of the future.