so grateful for a lucid moment to update...!

got to a crossroads mid-march, had to get onboard and actional about how i do my life. knew making my moves would bring new stresses to table, but it was a necessary, inevitable gamble and i have zero regrets.

of course the moment i jumped from the known into the unknown, implementing these big changes as gracefully and efficiently and compassionately as possible, i couldn't help but soothe myself old style by pressing forward in my work as if i had a savings account of energy to bank on. not only did i complete that training in colon hydrotherapy, i completed two other courses with Dr. Gabor Maté... one on the biology of abuse that was geared to pros working with troubled youth in the justice system; the second on the roots of addiction, and its expression from substance abuse to workaholism, this one geared to social workers and health care providers.

by the end of the second course i had to acknowledge i was running on empty. i had been having less and less success managing my pain since the start of april as it was, but within 24 hours of finishing the addiction course (LOL) i was no longer able to get thru the day or night without chewing down hourly on percocets. though i was tolerating the meds well all considered, i was totally beyond the liver toxicity zone for the amount of acetaminophen in the perks.

things happened awfully fast. just after the courses and after a terrible night, i had no choice but to get to a hospital morning saturday 12 april. the first three days of hospital experience were simply awful. my friend barbara's working experience with the system (she cares for brain injured patients at a variety of institutions) proved absolutely indispensable. i often couldn't speak for myself, she knew exactly how to keep us moving forward thru the most infuriating obstacles, i'm ever in her debt.

my first ER doctor tried to send me home with a script for Tylenol. twelve agonizing hours later a palliative radiologist got involved and some imaging and scans were finally done... the first round showed the cancer had sprung back to life, sending its coaches into bone, specifically the pelvis, hips and a few spots on the spine. he revised the tylenol prescription, wrote up a thwack of other narcotic scripts, pumped me up on a few boluses of morphine, and then sent us home with a view to work out the next step in a few days.

we were not entirely keen on this as the pain management thing had still not been successfully sorted. every few hours an episode would strike that took my breath and strength away. with no obvious wound or blatant physical injury to point to, i was often being treated like a soft-skinned complainer looking for narcs. so delirious with pain i was quite beyond registering this, it fell to barb to navigate our way. she refused to leave the hospital until it was understood that we would be returning if the new meds failed in any way to address the escalating pain episodes... and by coming back she meant straight into a bed, not left to wait hours for triage and care.

so we left and the hilarity began. the first pharmacy we were directed to didn't in fact have the meds, so they sent us to another. this pharmacy had the meds but they found a revision the MD had made in the script that he didn't initial, so we had to go back to get this rectified. meantime the clock was ticking on the morphine that was injected to cover me off the transition to orals. i was already feeling another episode collect in the wings. we got to the pharmacy with minutes to spare before they shut down for the night. i don't remember much about the next twelve hours, but the new meds failed fast and by 5 the next morning we were headed back to ER in another acute phase.

gone were the staff from the night before and we had to start the process all over again. i was shellshocked by the escalations going on. each acute brought new levels of agony and it seemed there was no relief in sight. never truly out of pain and saddled with nurses and MDs taking a laboriously cautious approach. it wasn't until we had three successive days of imaging that the tide turned... suddenly everyone could see in hard and fast depictions the reason i was in such escalating agony... from a few spots on the spine we saw the entire column get covered in mets in just a few days. at last i was being taken seriously.

we were able to graduate from a stretcher in the hall to a satellite ward where i was hooked up to IV and getting some periods of pain management. i was still not pain-free at any time, but i could at least see straight and the acutes that inevitably came got reduced as my requests for more meds got compiled and finally translated into higher dosage allowance. i always thought hospital was at least a harbour of last resort, a place where if nothing else they could and would address your pain... this proved not quite the case. instead i had more than a few occasions to loose faith in humanity and in nurses in particular. thankfully on the heels of each disappointment came so many beautiful angels! in fact, as we went more deeply into the hospital experience while still holding firm to our agenda, the angels became definitely more numerous.

still, i often wondered how those who didn't have family or friends around to help them out, how they coped with the lacking sense of urgency or compassion we all witnessed... patients were often left for hours without access to water or toilet, i felt so spoiled to never be alone... i confess i crossed the line several times, asking my friend to see to this or that other patient in the ward with us, i couldn't help it. it bothered me so much to see the a breezy lack of interest in doing anything beyond the minimum on show everywhere... i've never understood not putting your back into the day's work, i never will.

anyway, to make a long short short, and i'm truly glossing over a very intense and absorbing adventure, we ended up in the palliative oncology ward. once i got the lay of the land and my new normal i saw my needs twofold... on the one hand i had to do what i could to get control of my pain, because when i'm out of pain i can function and if i can function i can continue to hunt healing, no matter how stacked the odds continue to appear. miracles are miracles because they maintain their impossibility factors. i was consulted by both the radiologist and oncologist. nothing about chemo persuaded itself to me, that hardly needs explaining. but i looked into the use of radiation for palliation and i decided to gamble. its an odd trade off... the radiation might make it harder for the cancer to penetrate bone, it might also reduce bone met pain allowing me to reduce the amount of hydromorphone i'm IVing, it might also preserve the structure of my bones longer which will keep me on my feet longer. the gamble is that while pursuing that outcome it could also make my pain worse, give metastatic cancer in other parts of the body an edge, or cause an acute inflammatory response. so far its done all those things. 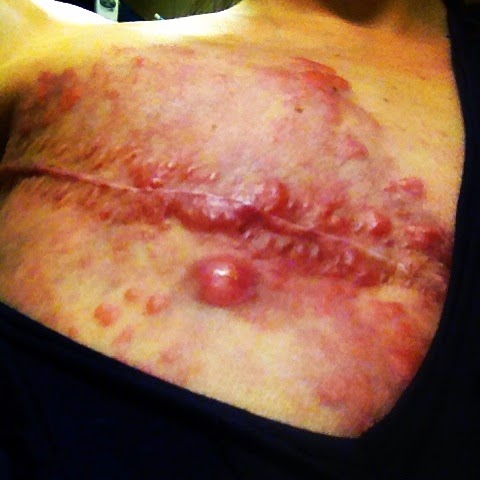 once i had the imaging on record (all new X-rays, CT and MRIs) and my pain could be taken seriously, i got outfitted with a properly-for-me calibrated pain pump that i now use to control my needs. the pump works by delivering a baseline level of medication over the course of a day. the bulk of my med comes on demand by me, these are called boluses. the few times i missed giving myself a bolus i got a sharp reminder of what's going on behind the scenes. i don't take anything for granted but i also don't pre-medicate. i've learned how to dance with the pump.

since admitted to hospital i now know the extent to which i have tumours everywhere. i know the invasion of my pelvis has also produced spots on the external hips... when i was having pain spikes the bulk of my agony was in the lower back with pain radiating into the legs, especially the L leg where the pain extended into the knee bone and sometimes all the way into the tibia. there's also evidence of a large fibroid mass in either uterus or ovary (we're not doing further tests at this point, whether those fibroids are in the uterus or on an ovary makes no difference), i also have tumours throughout the torso, particularly in the armpits, along the ribs, crisscrossing the abdomen, down the inguinal lines, and along the spine in the paraspinals. finally, i've got impressive ones growing along the clavicles and up into the neck, more so on the L side than right, and a couple small tumours at the occiput.

its easy to see why the white coats conclude me to be among the short list of goners. i can feel changes in the lungs, there has been fluid collecting in the pleural linings making it hard to take a deep breath, but i've been able to keep my O2 levels up, esp now that i'm managing my pain and can stay out of hyperventilation.

i decided to start the radiation right away, we got two treatments in before the easter weekend, then we restarted on the monday and today i had my last treatment. we will observe now for a period of anywhere from 2-6 weeks, it can take that long for the effects of radiation to fully express. so far i have that spectacular new lymphatic skin rash to contend with alongside the rapid growth of tumours, new and old. i'm taking lots of hydromorphone just to function, but being able to function means i can get laser-tight on my focus. part of the restructuring i chose to embrace over a month ago was principally about securing for myself exactly this kind of solitary staging... i need to be in authentic space, naked with my truth and values, able to do things my way according to conscience, all in order to give this effort the due required. dying well or healing well are the very same enterprise.

meantime i'm aiming to be out of hospital next week. a community and a theatre of miracles has come into manifestation around me the second i crossed over into clear crisis, its so very humbling and remarkable, i feel blessed and enraptured by what lies ahead. i have no fear, just wonder, commitment and excitement.

i'm also quite enjoying the thinness of veils with me now, how easy it is for me to pass back and forth between different layers of reality. i've had many nonmaterial visitors and stagings. one thing that happens a lot when i'm resting, i keep waking myself up, mouth open like a baby, expecting some mana from heaven to be spooned into my mouth... its so realistic i'm every time surprised to find i'm hallucinating it all. talking to myself at night a lot as well, feel sorry for my roommate. then this morning the police came to tell me they were now involved in the retrieval of a precious stone that had gone missing. of course when i opened my eyes there was no one there.