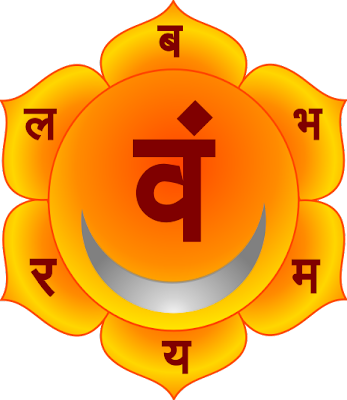 "[T]he next cakra, svadhisthana, must be the unconscious, symbolized by the sea, and in the sea is a huge leviathan which threatens one with annihilation."

"[T]his is the symbolism of all initiation cults: the awakening out of muladhara and the going into the water, the baptismal fount with the danger of ... the devouring quality or attribute of the sea."

"In the next center is the makara [crocodile-like creature / sea dragon, Encyclopaedia Britannica], the leviathan. So in crossing from muladhara to svadhisthana, the power that has nourished you hitherto shows now an entirely different quality: what is the elephant on the surface of the world is the leviathan in the depths. The elephant is the biggest, strongest animal upon the surface of the earth, and the leviathan is the biggest and most terrible animal down in the waters. But it is one and the same animal: the power that forces you into consciousness and that sustains you in your conscious world proves to be the worst enemy when you come to the next center. For there you are really going out of this world, and everything that makes you cling to it is your worst enemy. The greatest blessing in this world is the greatest curse in the unconscious. So the makara is just the reverse: the water elephant, the whale dragon that devours you, is the thing that has nourished and supported you hitherto—just as the benevolent mother that brought you up becomes in later life a devouring mother that swallows you again. If you cannot give her up she becomes an absolutely negative factor—she supports the life of your childhood and youth, but to become adult you must leave all that, and then the mother force is against you. So anyone attempting to leave this world for another kind of consciousness, the water world or the unconscious, has the elephant against him; then the elephant becomes the monster of the underworld."
at 10:53 AM