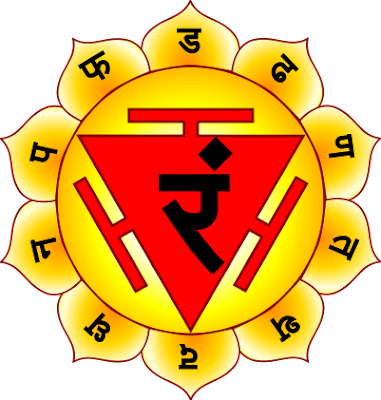 "[I]f you pass through that danger [the devouring quality or attribute of the sea] you reach the next center manipura, which means the fulness of jewels. It is the fire center, really the place where the sun rises. The sun now appears; the first light comes after baptism. This is like the initiation rites in the Isis mysteries, according to Apuleius, where the initiate at the end of the ceremony was put upon the pedestal and worshiped as the god Helios, the deification that always follows the baptismal rite. You are born into a new existence; you are a very different being and have a different name."

"[M]anipura is the center of the identification with the god, where one becomes part of the divine substance, having an immortal soul. You are already part of that which is no longer in time, in three-dimensional space; you belong now to a fourth-dimensional order of things where time is an extension, where space does not exist and time is not, where there is only infinite duration—eternity."

"[D]esire, passions, the whole emotional world breaks loose. Sex, power, and every devil in our nature gets loose when we become acquainted with the unconscious. Then you will see a new picture of yourself. That is why people are afraid and say there is no unconscious, like children playing hide-and-seek."

"A man who is not on fire is nothing; he is ridiculous, he is two-dimensional. He must be on fire even if he does make a fool of himself. A flame must burn somewhere, otherwise no light shines; there is no warmth, nothing."

"In manipura the ram is the symbolic animal, and the ram is the sacred animal of Agni, the god of fire. That is astrological. The ram, Aries, is the domicilium of Mars, the fiery planet of passions, impulsiveness, rashness, violence, and so on. Agni is an apt symbol. It is again the elephant, but in a new form. And it is no longer an insurmountable power—the sacred power of the elephant. It is now a sacrificial animal, and it is a relatively small sacrifice—not the great sacrifice of the bull but the smaller sacrifice of the passions. That is, to sacrifice the passions is not so terribly expensive. The small black animal that is against you is no longer like the leviathan of the depths in the cakra before; the danger has already diminished. Your own passions are really less a danger than to be drowned in unconsciousness; to be unconscious of one's passion is much worse than to suffer from passion. And that is expressed by Aries, the ram; it is a small sacrificial animal of which you don't need to be afraid, for it is no longer equipped with the strength of the elephant or the leviathan. You have overcome the worst danger when you are aware of your fundamental desires or passions."
at 11:36 AM