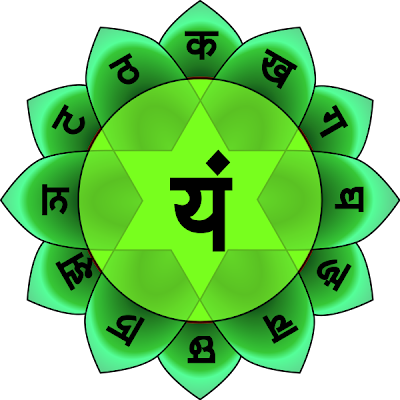 "Above the diaphragm you come into anahata, the heart or air center, because the heart is embedded in the lungs and the whole activity of the heart is closely associated with the lungs."

"When you have come into the whirlpool of passions, of instincts, of desires and so on, what follows after?"

"[I]n anahata they are lifted above the surface of the earth."

"[Y]ou begin to reason, to think, to reflect about things, and so it is the beginning of a sort of contraction or withdrawal from the mere emotional function. Instead of following your impulses wildly, you begin to ... disidentify yourself from your emotions, or so overcome your emotions actually. You stop yourself in your wild mood and suddenly ask, 'Why am I behaving like this?'"

"[I]n anahata a new thing comes up, the possibility of lifting himself above the emotional happenings and beholding the. He discovers the purusa [FN: the primeval man or ... the luminous man] in his heart, the thumbling, 'Smaller than small, and greater than great.' In the center of anahata the ... small flame means the first germlike appearance of the self."

"[T]ake a patient in analysis who has reached the stage of manipura, where he is an absolute prey to his emotions and passions. I say: 'But you really ought to be a bit reasonable; do you see what you do? You cause no end of trouble to your relations.' And it makes no impression whatever. But then these arguments begin to have a pull; one knows that the threshold of the diaphragm has been crossed—he has reached anahata. You see, values, convictions, general ideas are psychical facts that are nowhere to be met with in natural science. ... They become visible only in anahata. Now, according to tantric yoga, the purusa is first seen in anahata: the essence of man, the supreme man, the so-called primordial man then becomes visible."

"The next animal is the gazelle, again a transformation of the original force. The gazelle or antelope is not unlike the ram, living upon the surface of the earth—the difference being that it is not a domesticated animal like the male sheep, nor is it a sacrificial animal. It is not at all offensive; it is exceedingly shy and elusive, on the contrary, and very fleet of foot—it vanishes in no time. When you come upon a herd of gazelles, you are always amazed at the way they disappear. They just fly into space with great leaps. There are antelopes in Africa that take leaps of six to ten meters—something amazing; it is as if they had wings. And they are also graceful and tender, and have exceedingly slender legs and feet. They hardly touch the ground, and the least stirring of the air is sufficient to make them fly away, like birds. So there is a birdlike quality in the gazelle. It is as light as air; it touches the earth only here and there. It is an animal of earth, but it is almost liberated from the power of gravity. Such an animal would be apt to symbolize the force, the efficiency, and the lightness of psychical substance—thought and feeling. It has already lost a part of the heaviness of the earth. Also, it denotes that in anahata the psychical thing is an elusive factor, hardly to be caught. It has exactly the quality that we doctors would mean when we say that it is exceedingly difficult to discover the psychogenic factor in a disease."

"So the crossing-over from manipura to anahata is really very difficult. The recognition that the psyche is a self-moving thing, something genuine and not yourself, is exceedingly difficult to see and to admit."

"Each of the four lower centers has an element belonging to it—muladhara, the earth, svadhisthana, the water, then comes fire in manipura, and finally air in anahata."