i had the bone scan yesterday and it was really uneventful... all the medical staff i encounter are just very lovely and kind and the only consequence i noted after being injected with another radioactive marker was a throbbing pain in the L lymph above the breast near the armpit that wasn't there before. while i was waiting i got a call from my surgeon who told me that more of the original biopsy results have come in. the breast lesion came back positive for ductal carcinoma which is more consistent with a primary breast cancer, but the lymph node was malignant, which indicates metastasis. we were just about to begin a conversation about the next step when i got called away for my bone scan. i enjoy to look at these kinds of little intercessions and don't view anything as random or chance.

i was thinking yesterday about christopher hitchens, with whom i had a brief connection towards the end of his life. i was reflecting on the irony that while on the one hand he did such a good job eviscerating the worst of religious dogmatism, he nursed a stubborn and indulgent blindness toward the secular priests we've appointed in the form of doctors and scientists. i found it strange that he so unquestionably turned himself over to their rites and incantations and poignant in the extreme that one of the last hospital rooms he was ushered into had the crucifix embedded in the tiling around the door. no one will ever know how someone in his extreme condition would have fared with radical lifestyle changes, ketogenic diet and other alternative adjuvants, all we know is how quickly he was tortured in the extreme and reduced to a shell of a man by the corrosive treatments he was given. my point is, the irony might have been lost on him, i don't want the ironies to be lost on me.

yesterday i had the great fortune of another timing... dr. mercola published a more expansive article on the ketogenic diet than i'd been able to resource before and in reviewing it carefully i realized i'd been making some small but important mistakes and had overlooked entirely the importance of intermittent water fasting. i haven't been limiting my caloric intake and certainly i've been eating too much protein. i didn't realize that the aim isn't just to radically limit carbohydrates.... you can eat low to no carbs and still have high blood glucose levels on account of the way the liver stores the results of the protein you consume. today armin's generously agreed to get me a simple blood glucose meter, like the kind used for diabetics, which will help me more accurately assess how well i'm managing to get into the new metabolic zone i'm aiming for. this re-education yesterday delighted me as it perhaps explains why i haven't had the results i was expecting. i also have started drinking the baking soda which oddly is neither repellant or upsetting to my system, on the contrary, something in me quite likes it and i'm feeling even better than before. its kickstarted my eliminations which is _fabulous_ and i feel more perky than ever.

the reason i was thinking about christopher was that i've had a nagging feeling that i might really regret giving myself over to surgery before making time and space and effort available to what i'm doing. at this point i have no idea how far the cancer may have already metastasized internally and won't know until next week. the idea keeps repeating in my head that whatever is done can be undone, and sometimes you have to risk being accused of great folly to achieve great things.

tonight i'll be out to support the premier screening of my friend john board's film, "me, the bees, and cancer" at the royal cinema on college in little italy at 7p... the screening's proceeds will go towards the actor's fund of canada... john and i are plotting a series we'd like to produce about our experiences with cancer. 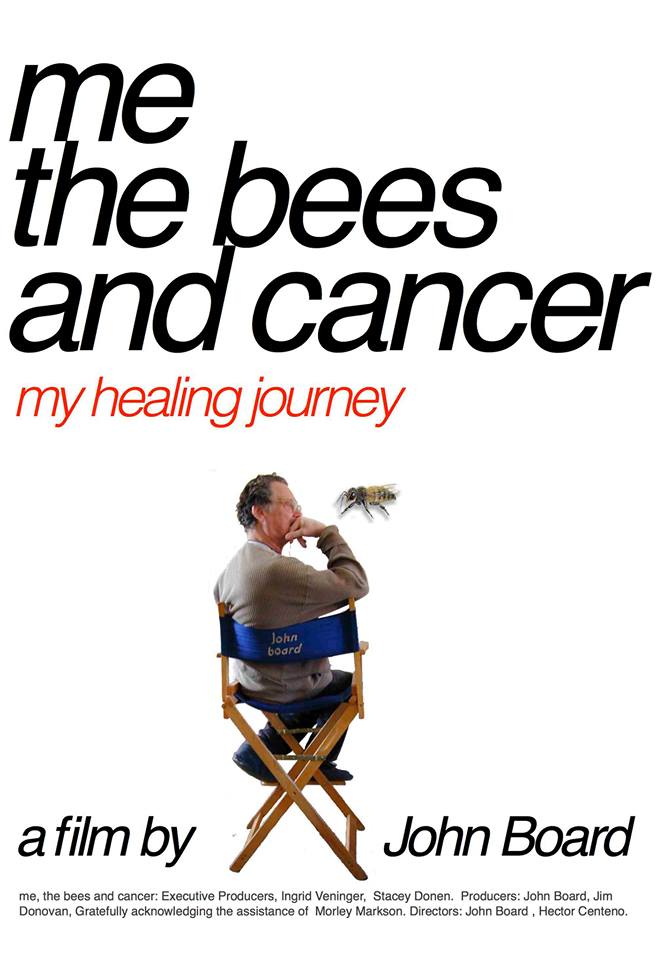